My Unite D'habitation Hotel Review: Myself and my partner Matt Beaumont are both HUGE brutalist architecture fanatics and particular fans of the works of French architect Le Corbusier. So it seemed only natural that we stay in his 1950's l'Unite D'habitation or Cité radieuse (meaning radiant city), the most famous of his string of modernist residential housing developments following the same design and community principle. l’Unité d’habitation de Marseille is the official name of the building in Marsielle but it has many other names, some of my personal favourites issued by the locals; ‘The Nutter’s House’ or ‘Le Corbu’. Originally this was innovative social housing for the many people who didn’t have or couldn't afford homes after the war. However, now the apartments inside are highly sought-after and very expensive. Its 337 apartments can accommodate 1,600 residents, but it also boasts two shopping streets, a hotel, a restaurant and a rooftop terrace.

The ‘city’ in Cité radieuse represents a pioneering response to the social problems of the time. The idea was that this high rise building could be used to create spacious city homes with the same amenities as a typical street. And it was a huge success! So much so that his concept formed the basis of several housing developments designed by him throughout Europe, (but not all of them had the same levels of success). Cité radieuse remains the only one open to the public as a functioning hotel.

Although it is widely thought of as Le Corbusier's design - he can't take all the credit. Cité radieuse was actually a collaboration between Le Corbu and the painter-architect Nadir Afonso. 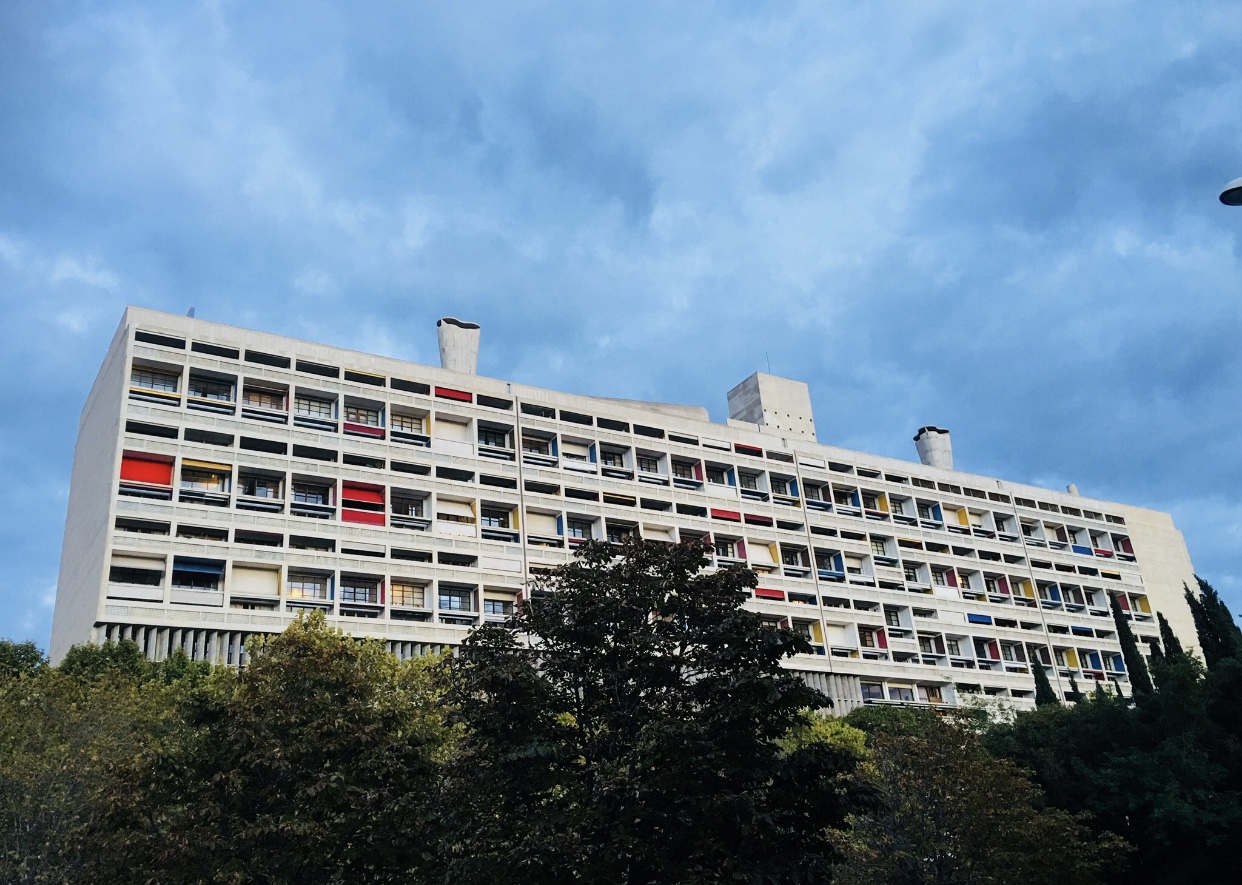 One of the reasons this building is so legendary is that the name Brutalism was coined during this project. Brutalism comes from how Le Corbusier constructed his buildings, so he is the true OG of brutalist architecture. They are made from béton brut (hard cement) – hence the word brutalism. By using cement, which was much cheaper than more traditional building materials, Corbusier was able to build social housing on a mass scale. The building rests on pillars of cement, each apartment has split levels to make sure they get maximum light, and balconies are painted bright colours. 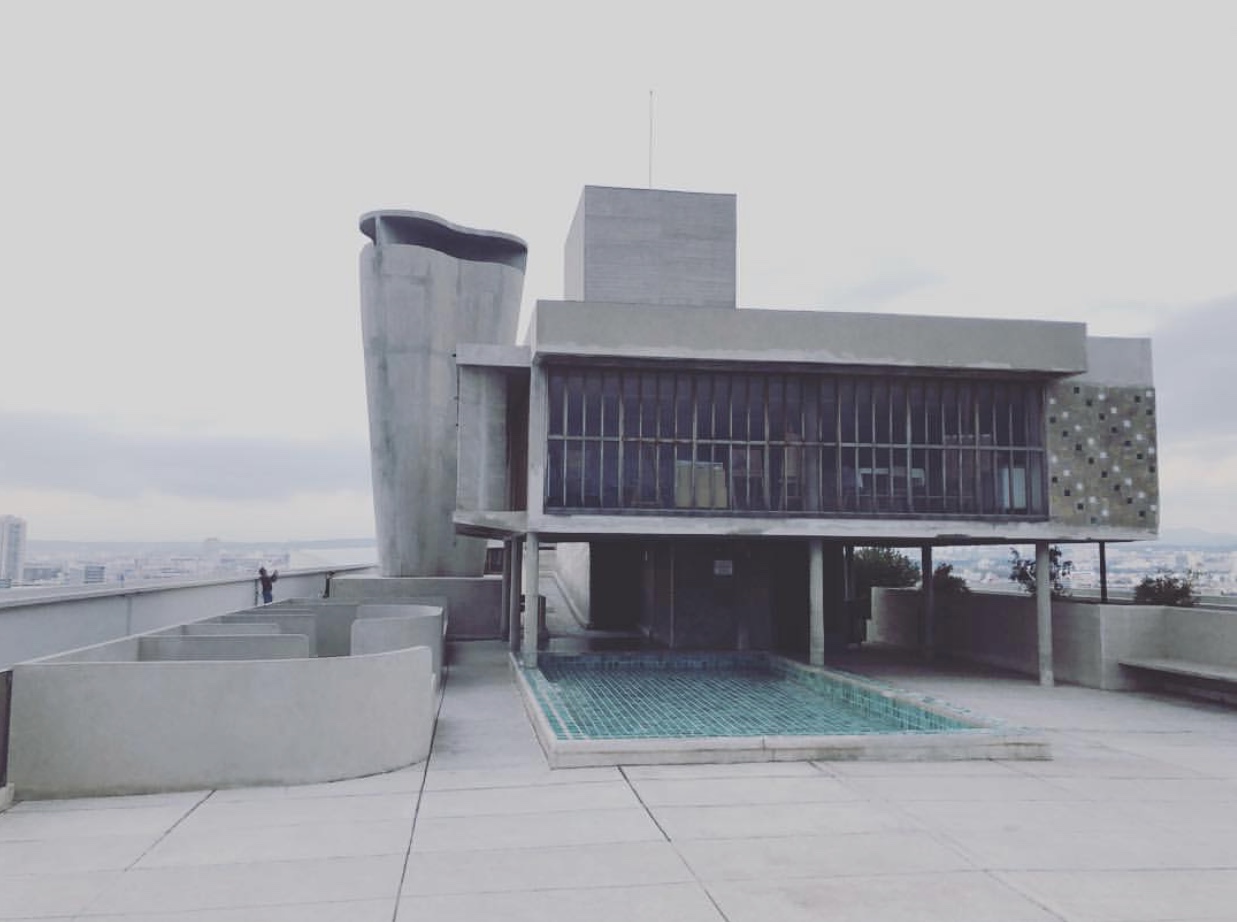 From the moment we arrived, we were both pretty taken aback by the beauty of the building and history that comes with it. It’s certainly a unique building with breathtaking attention to detail; Le Corbusier carefully calculated the exact dimensions each person would need using the Fibonacci sequence. We spent a good few hours taking it in and exploring every inch of the architectural marvel. 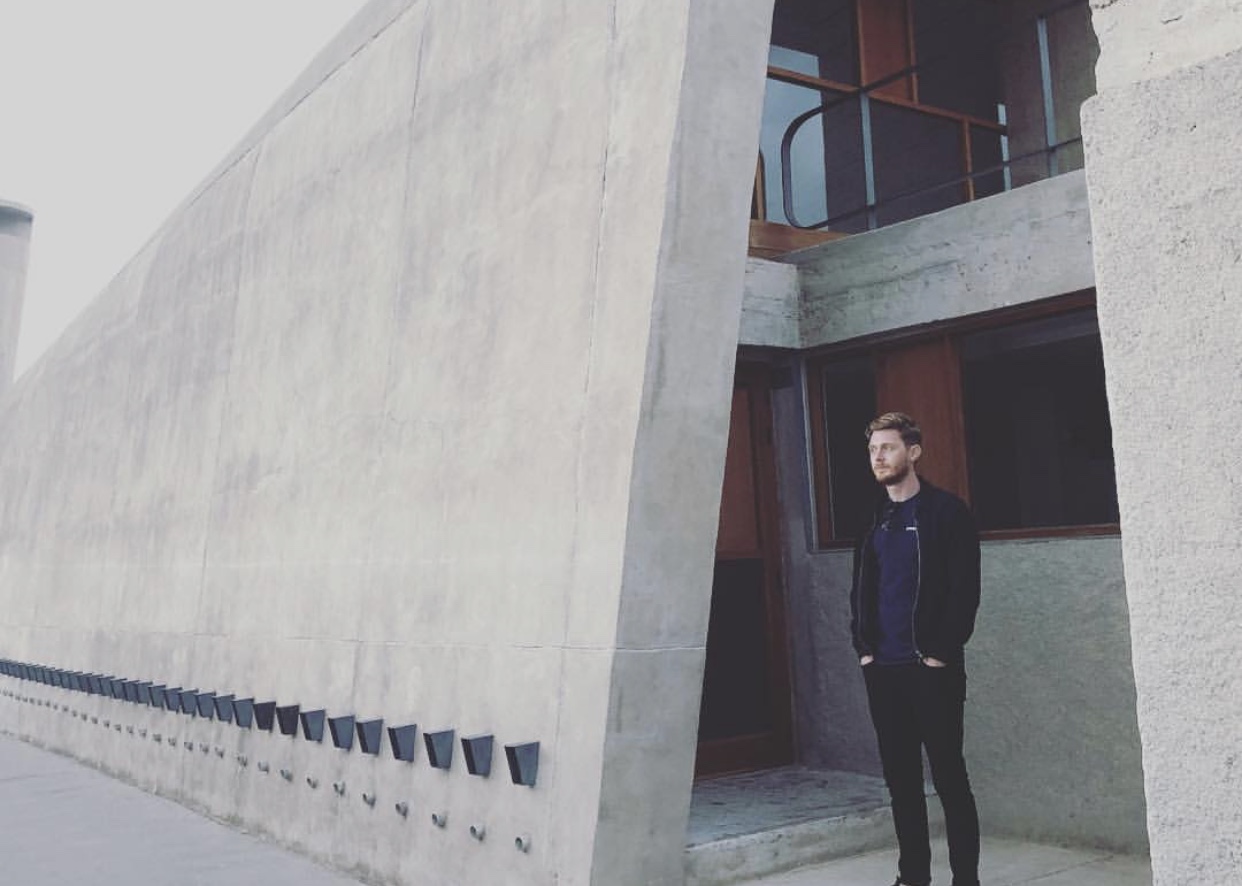 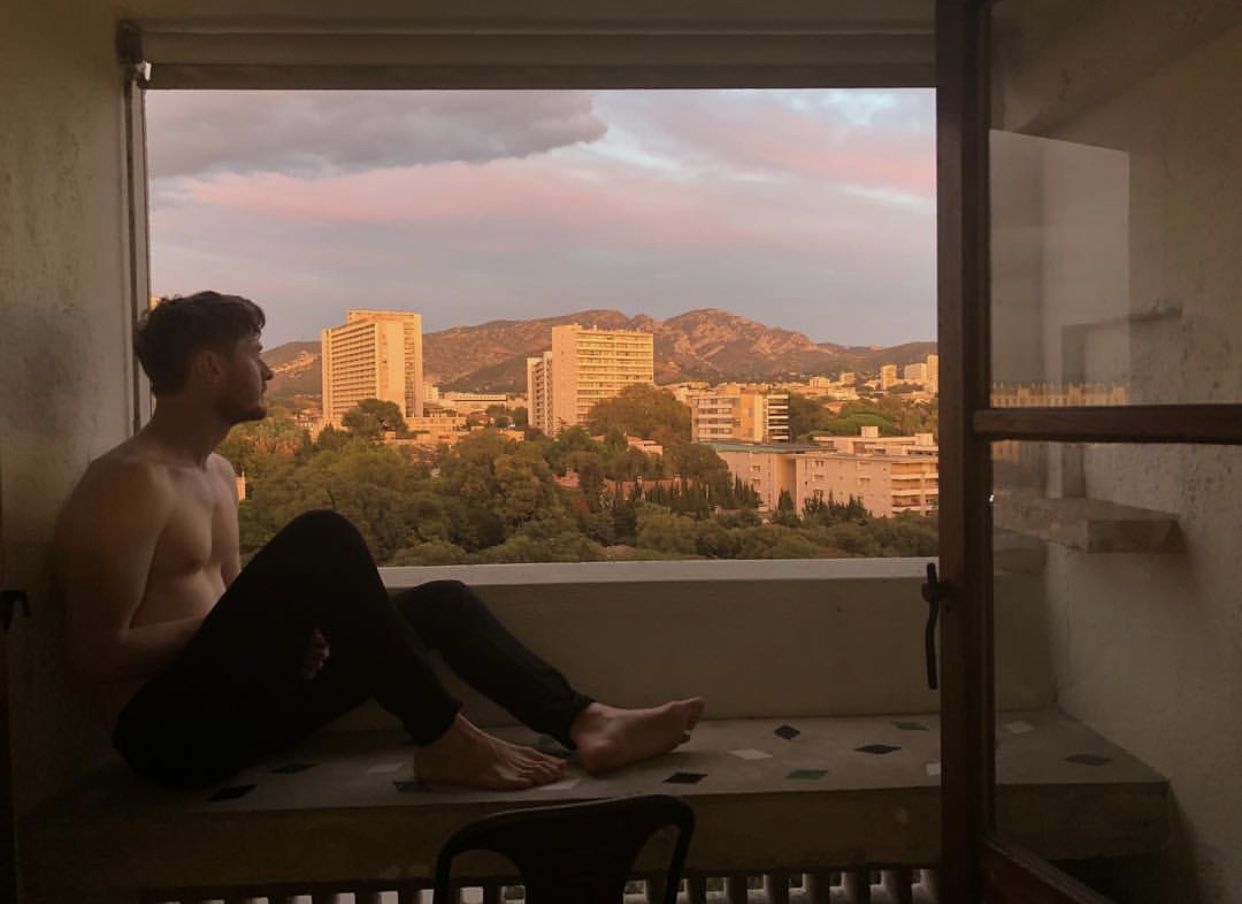 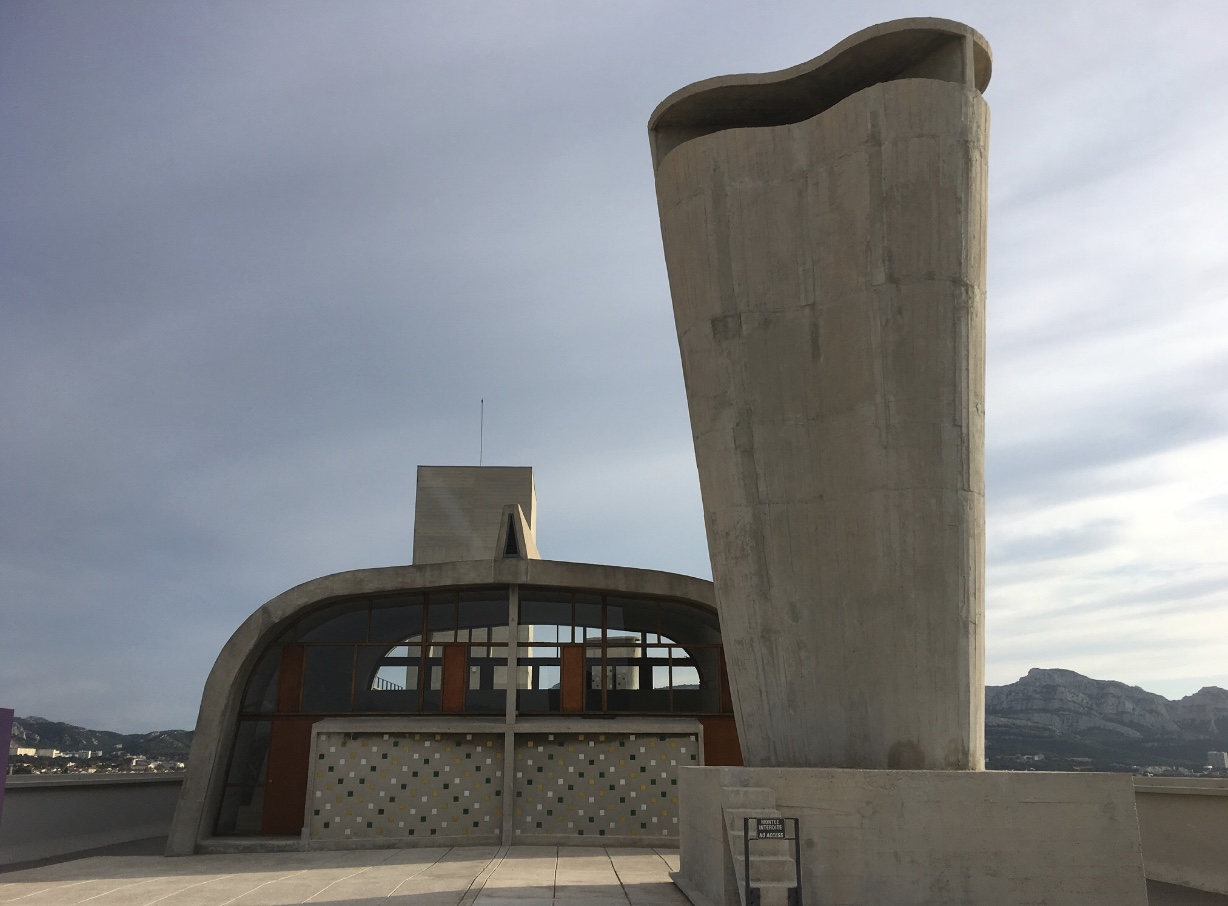 This was the view from our bedroom, just perfection. We had a shared bathroom and it was a tad on the small side as far as hotel rooms go - but being a part of Le Corbusiers dream for a few nights was far better than any 5* hotel experience I've ever had. 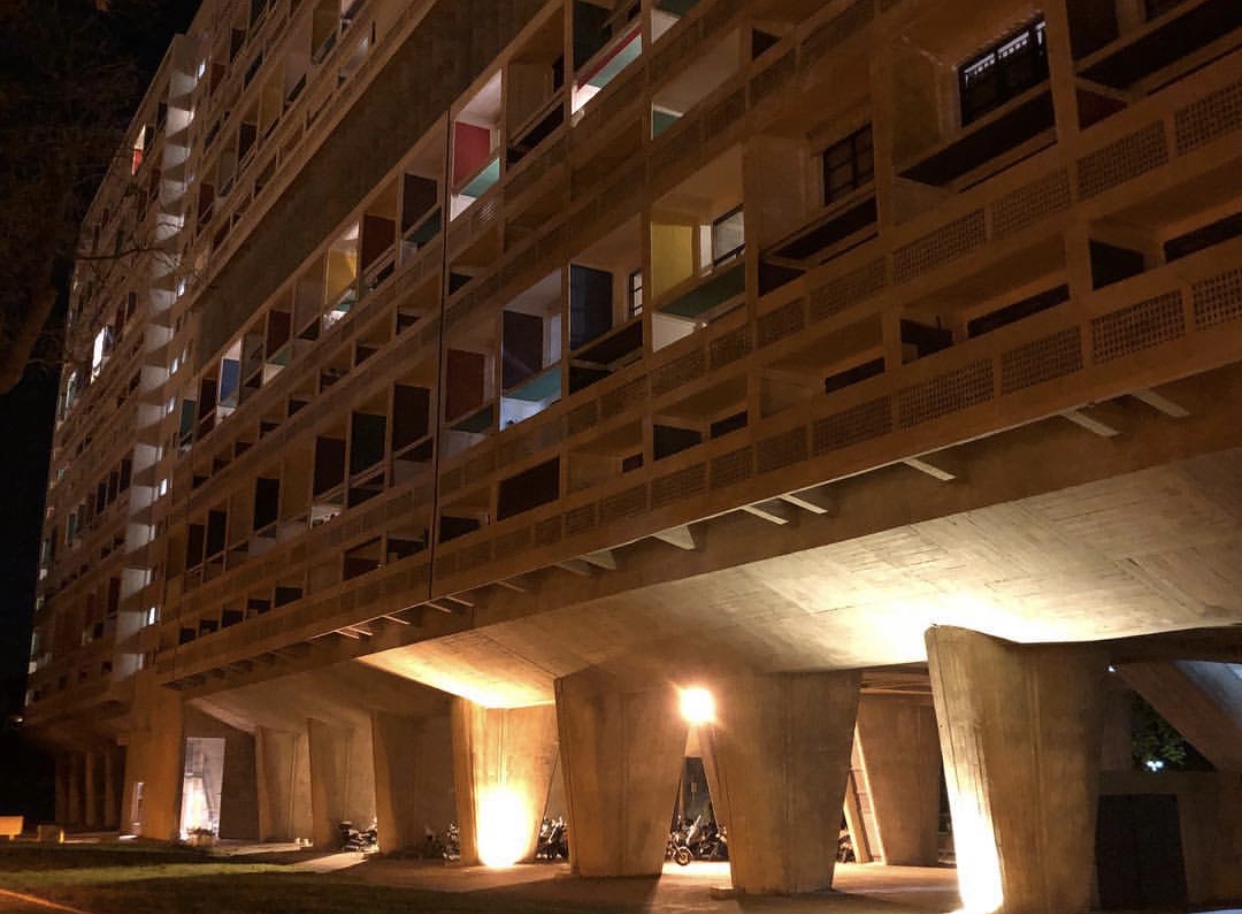 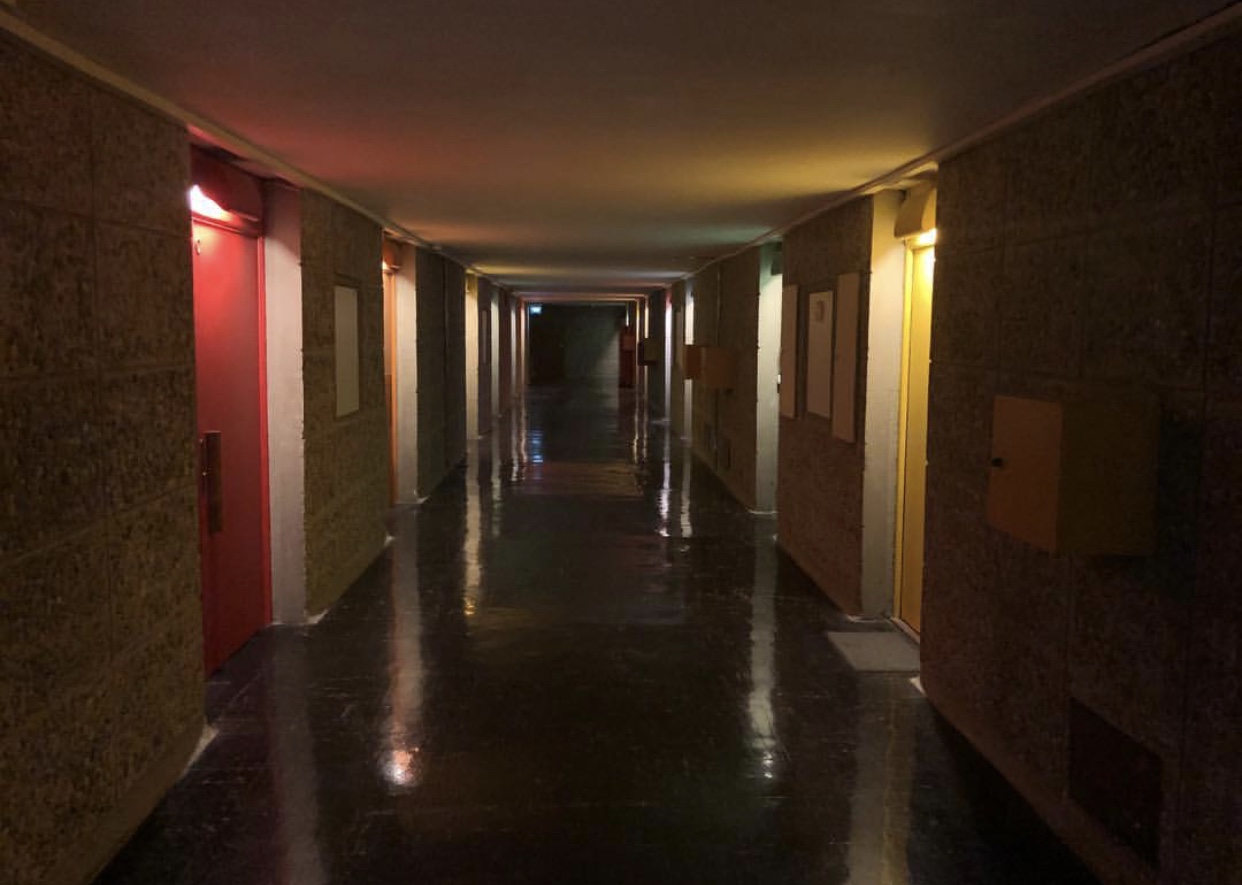 There have been many housing projects in recent years which have tried to mimic Le Corbusier's concept with his Unite D' Habitation series, but none have quite got it right (the one that stands out most to me is Sheffield Park Hill flats, which are pale in comparison.)  The influence this series of buildings has had on architecture around the world is undeniable. Every cement building design to date has this project to thank for its innovative pioneering style. How a piece of architecture that was so fashionable in the 1950s, can remain so to this day is a real testament to Corbusier and Afonso and demonstrates how great art and architecture is a gift to the world.

Whilst we were in Masielle we also visited MUCEM, a modern art museum built by a local architect Rudy Ricciotti.It's a stunning piece of modern architecture and is a see-through concrete patterned structure that encloses a glazed cube. This inner box is wrapped with free and open to the public circulation routes made of passages and ramps that connect the different levels. 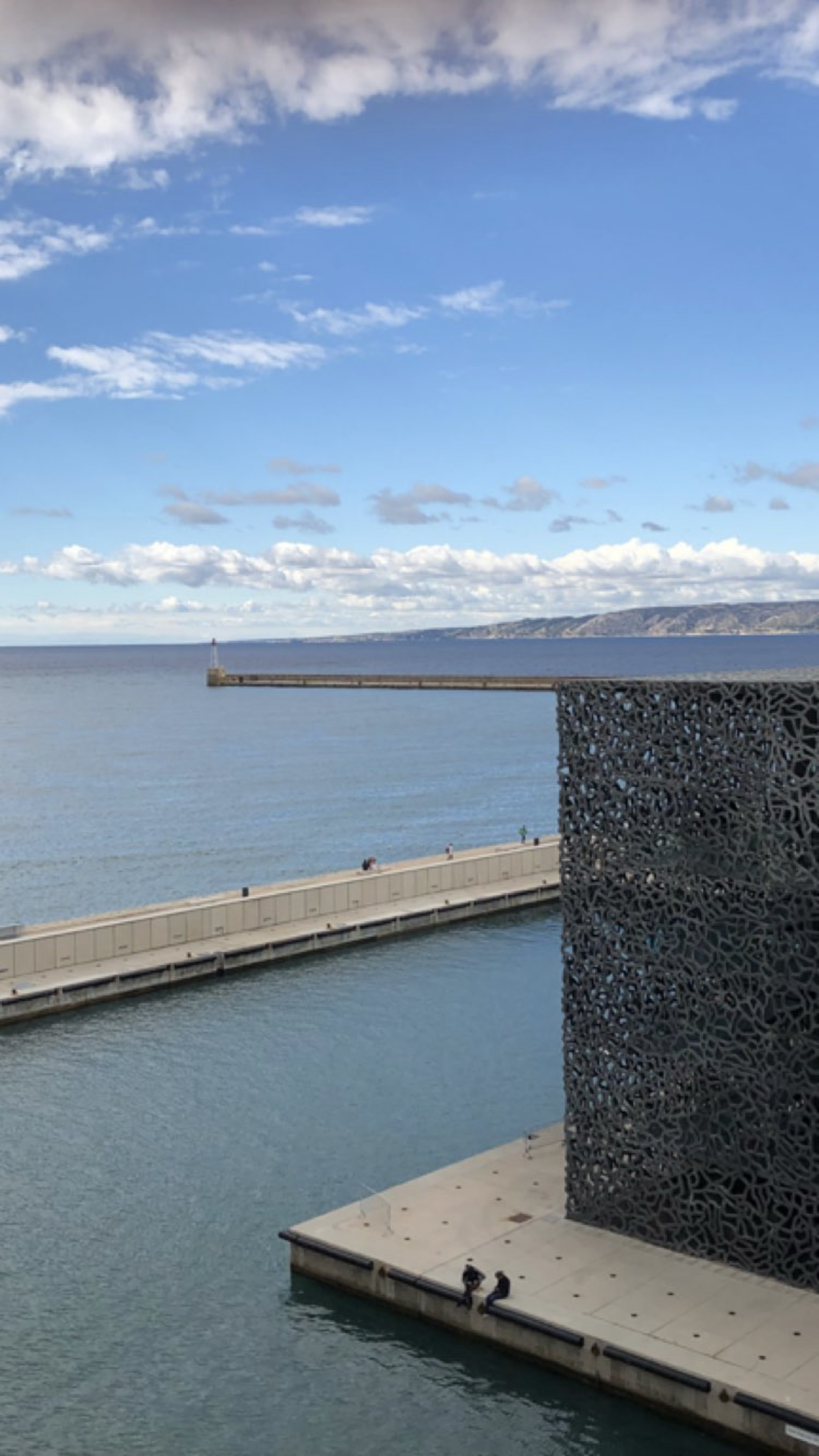 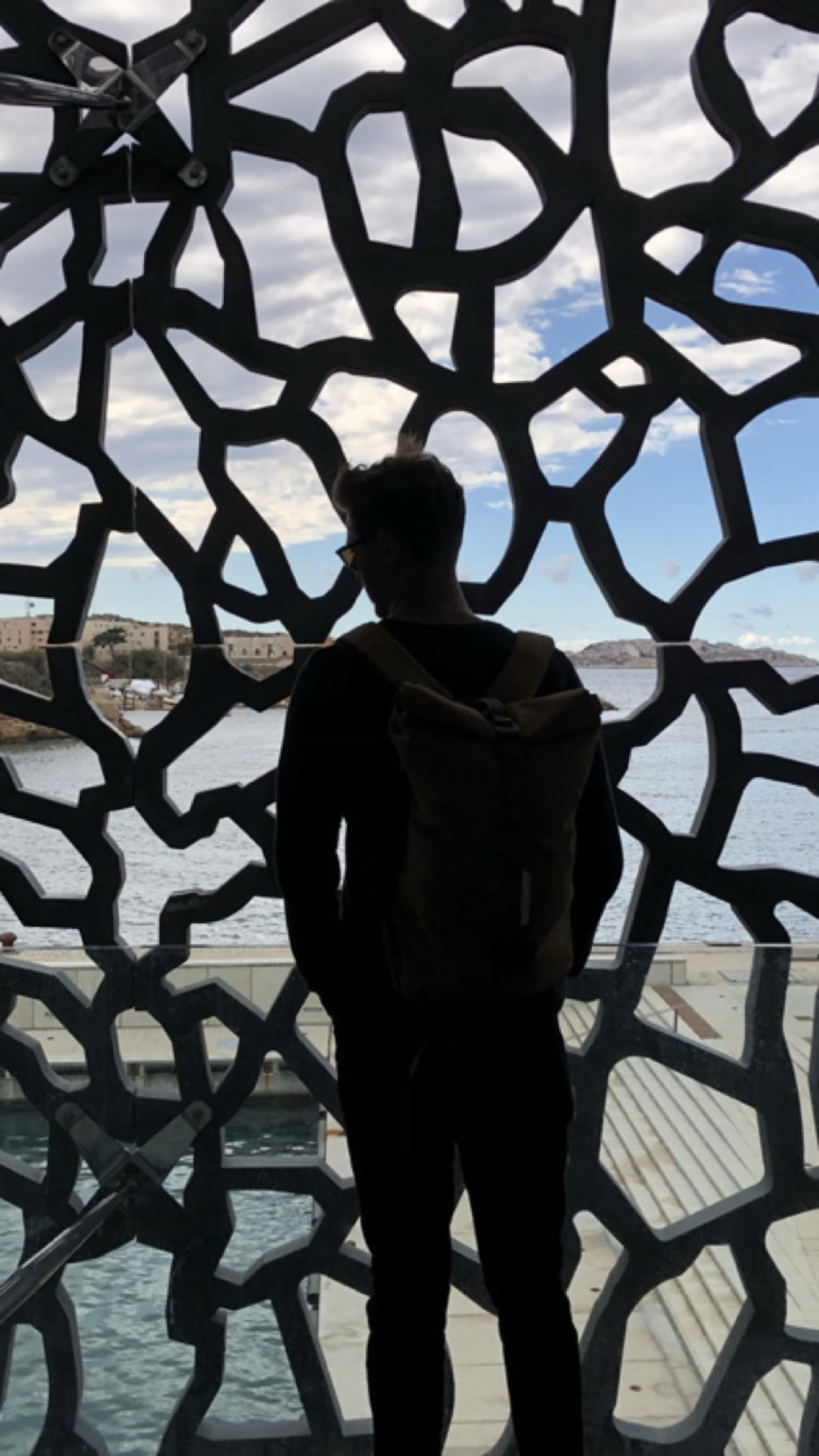 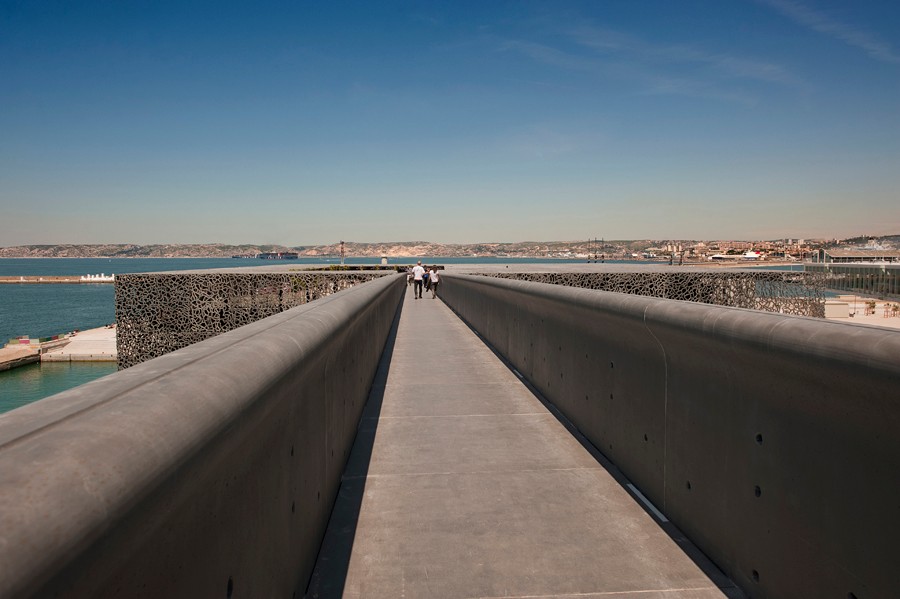 After this, I was all architectured and citied out so we went for a hike in the Parc national des Calanques which was equally lovely. (We just took the bus from outside Cité radieuse and took a simple 3 hour round trail). 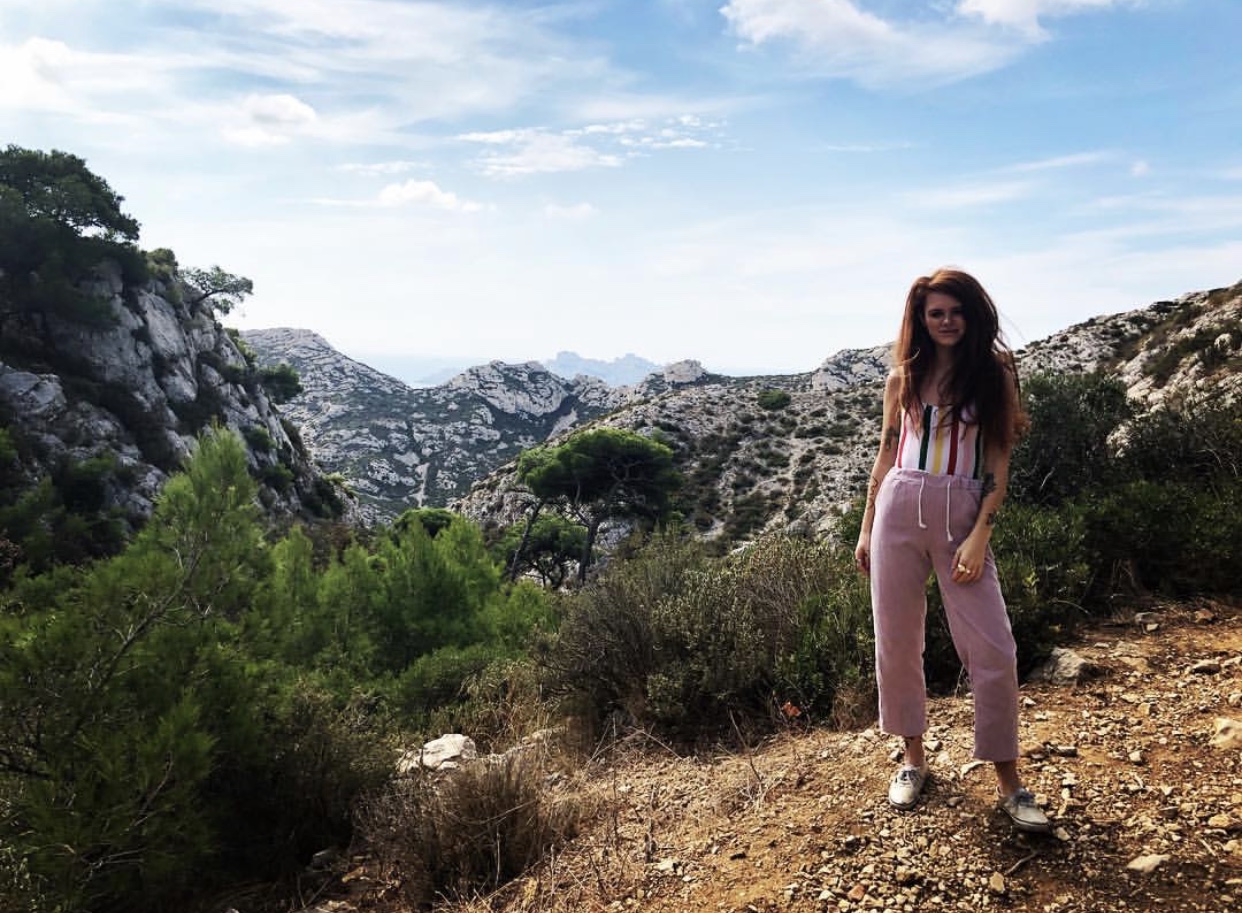 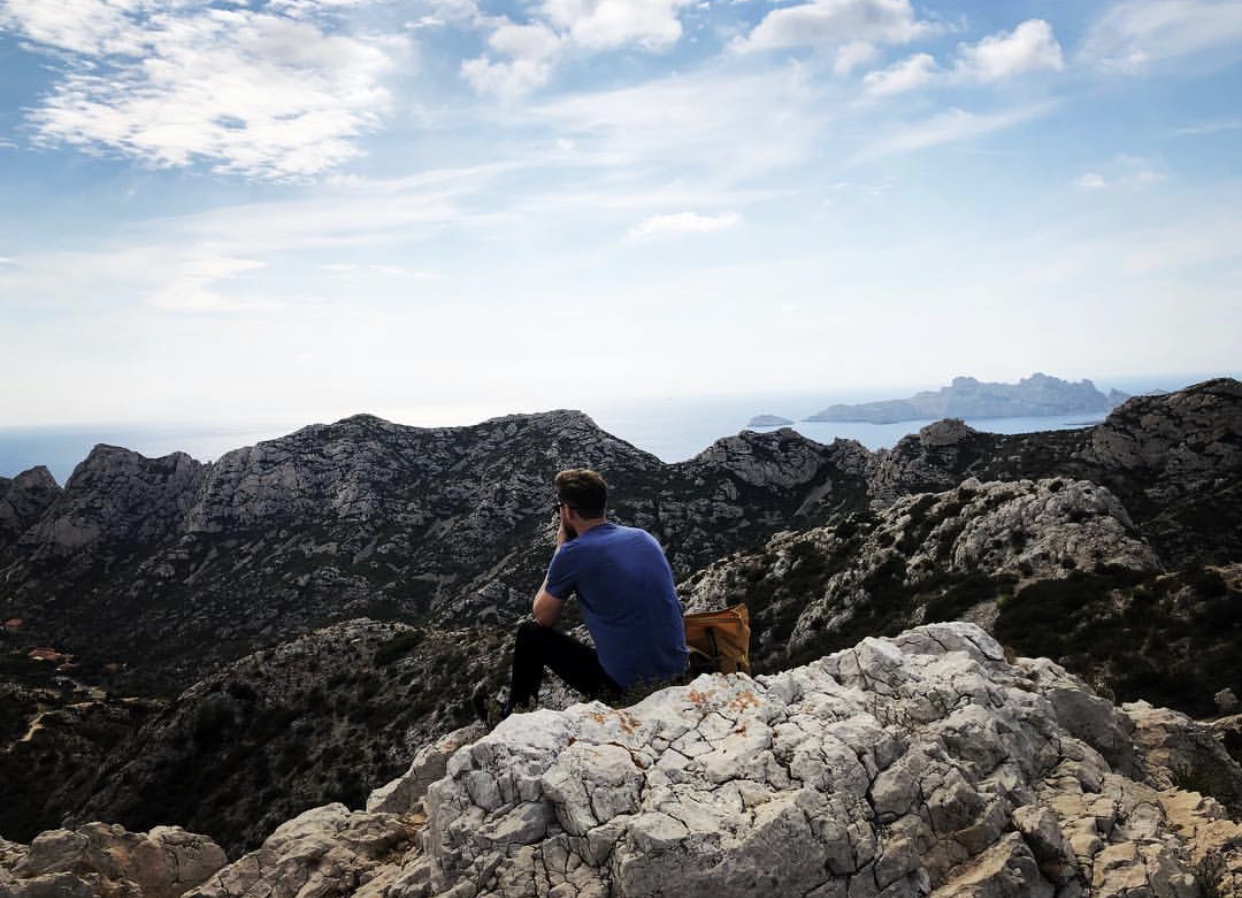 Here is me after 3 days design & nature in Marseille. 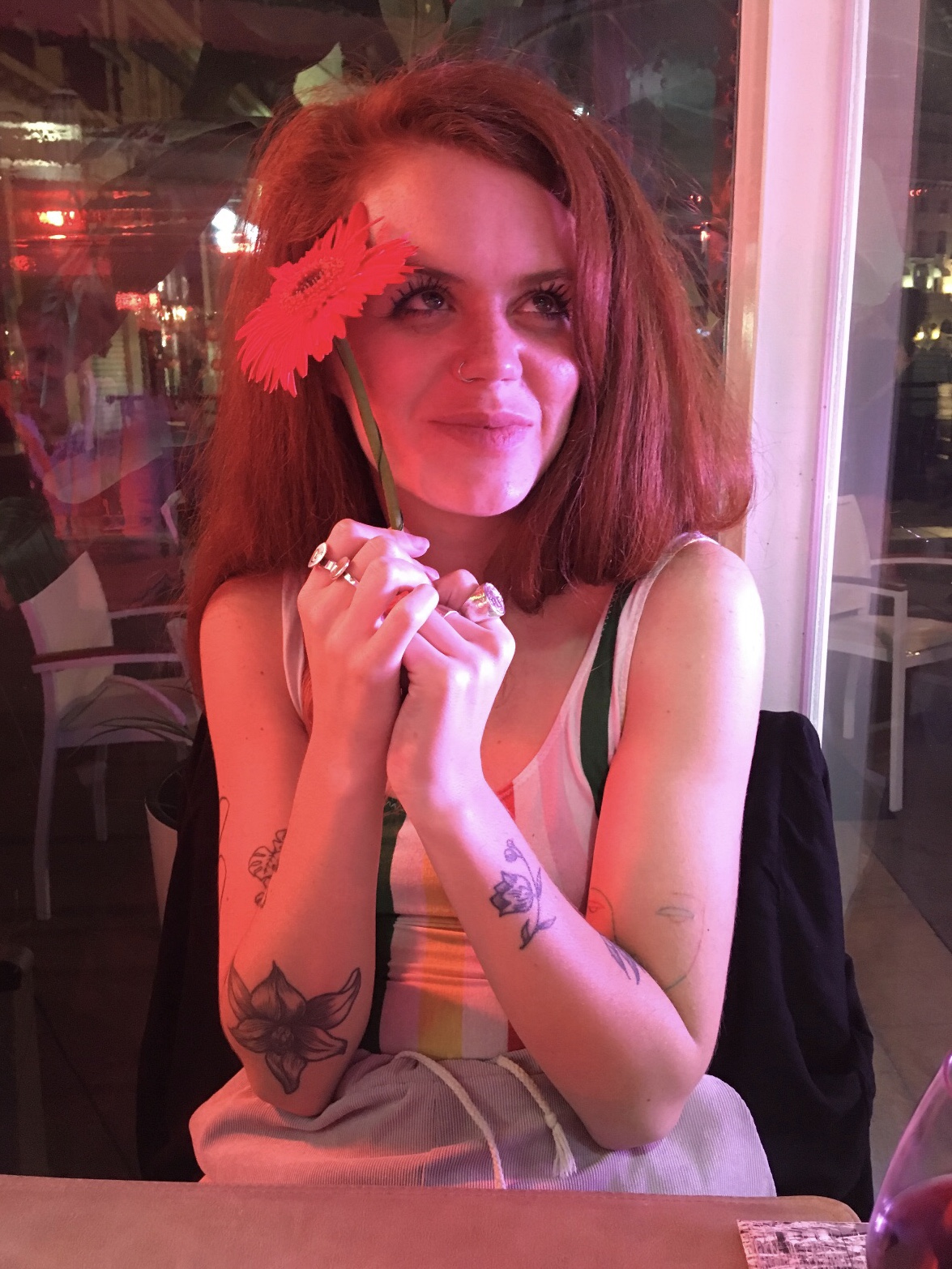 You can read more of my blogs here.

Making the most of 3 weeks Island hopping in Indonesia on a mid range budget
January 4, 2021

My Unite D'habitation Hotel Review & Things to do in Marseille in 3 days
January 4, 2021